Will 2020 Be the Year Seattle’s Housing Market Starts Rising Again?

Home prices in the Seattle metro are have fallen over the past year or so, a trend we’ve covered in the past. But now, as we enter 2020, the Seattle housing market is showing signs of an upswing.

It’s unclear at this time whether that trend will continue throughout 2020. But it’s a positive sign for homeowners, especially for those who have seen their home values decline over the past couple of years.

For the past five or six years, the Seattle real estate market has been marked by extremes. An extreme drop in inventory led to an astronomical rise in home prices, as buyers competed fiercely for limited supply. This went on for several years, starting in late 2012 and continuing through 2018.

The median home price within the Seattle-area housing market rose by nearly $400,000 during that six-year period. In terms of home-value appreciation, Seattle was miles ahead of most other U.S. cities during those years.

But that all began to change during the second half of 2018, which was a kind of tipping point for the Seattle real estate market. Affordability issues led to a decline in housing demand. Home prices began to drop as buyers pulled back.

A Somewhat Positive Forecast for 2020

Flash forward to the present. At the end of 2019, the Seattle area began to show signs up a home-price upswing. And at least one forecast predicts that house values in the area could inch upward a bit during 2020.
Just don’t expect any sizable or significant gains for the median home price in Seattle. That seems unlikely, based on current conditions.

According to a December 2019 report by The Seattle Times, home prices in the area have posted year-over-year gains for three months in a row now.

To quote that report:

For more evidence of a housing market turnaround, we can look at the price trends recorded by Zillow over the past few years. 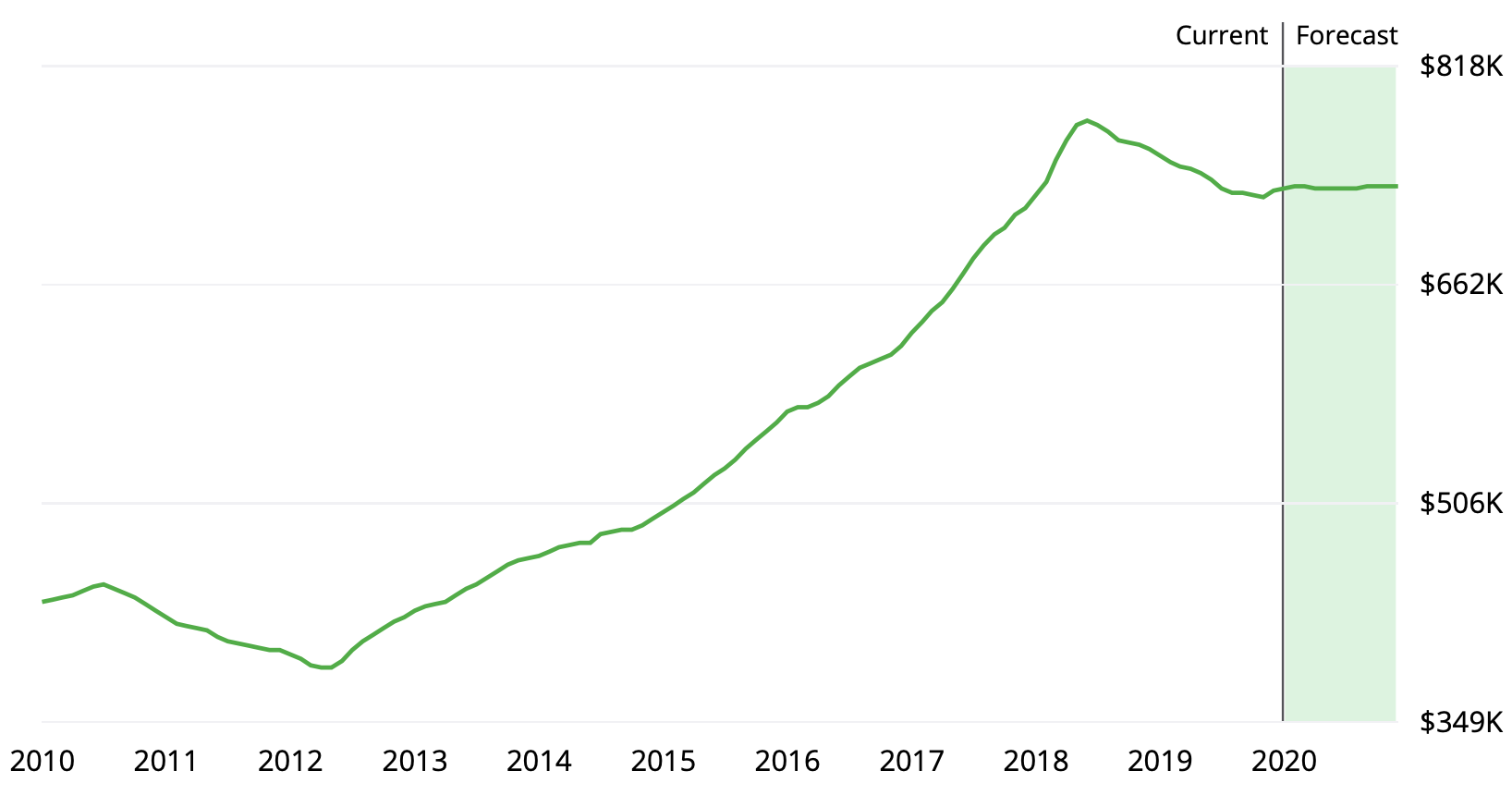 The chart shown above shows Zillow’s assessment of the median home value for Seattle, Washington going back ten years or so. Two things will jump out at you right away:

First, you can see where prices began to rise sharply starting in late 2012. That trend went on for several years, during which Seattle posted double-digit annual gains to outpace most other U.S. cities.

You can also see where home values peaked and then turned south, starting in 2018. That marked the beginning of a sustained downturn in prices that would last for over a year.

But now, it seems as though house values in the area might stabilize and even rise during 2020.

The economic research team at Zillow expects to see a small, and possibly negligible, rise in home prices for the Seattle housing market in 2020. According to a January forecast on the company’s website:

“Seattle home values have declined -3.9% over the past year and Zillow predicts they will rise 0.5% within the next year.”

Inventory Remains Tight in the Area

While Seattle’s housing market appears to be shifting in terms of home-price growth, the inventory situation remains a challenge for many buyers.

The entire Puget Sound region has experienced tight inventory conditions over the past few years, with a scarcity of real estate listings. But that trend is most noticeable within the city of Seattle itself, where the number of homes on the market falls well short of buyer demand.

The number of properties for sale declined over the winter holiday season, as it usually does. That puts even more pressure on home buyers who are trying to find a suitable property within budget.

OB Jacobi, president of Seattle-based Windermere real estate, said in a recent statement: “Tis the season for the number of homes for sale to start dropping, and we don’t expect to see a significant influx of new inventory until spring.”

According to a recent analysis from Zillow, the Seattle housing market recently posted the largest decline in for-sale inventory among the nation’s 35 biggest metro areas. Inventory in the area dropped by nearly 30% during 2019, according to that report.

Supply levels are particularly tight at the lower end of the pricing spectrum, since there’s more demand for homes in that price range. This condition is plaguing many cities across the U.S., to varying degrees. In fact, it’s one of the top-five housing trends for 2020 we identified in a recent report.

Is Now a Good Time to Buy in Seattle?

Housing inventory in Seattle remains tight, as mentioned above. That makes things more challenging for buyers. But due to other factors, 2020 could be a good year to buy a home in the Seattle area.

We’ve covered home price trends already. After a period of decline — a “market correction,” as economists call it — house values in the area are now showing signs of strength.

The local economy is firing on all cylinders, as well. According to the U.S. Bureau of Labor Statistics, the unemployment rate for the Seattle-Bellevue-Everett metro area was down to around 2.3% as of November 2019. That was more than one percent lower than the nation’s unemployment rate of 3.5% for the same month.

Mortgage rates are another key consideration. The average rate for a 30-year fixed mortgage has been hovering below 4% for months now. And industry analysts expect that trend to continue for the foreseeable future.
So in many ways, 2020 could be a good time to buy a home in the Seattle area. But finding a property to purchase is another story entirely.