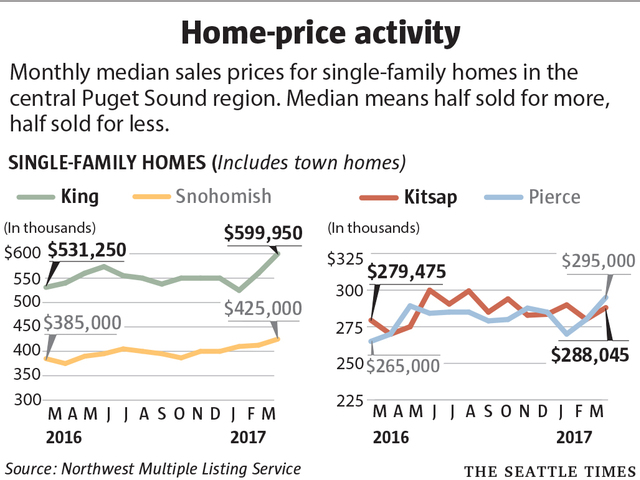 King, Snohomish and Pierce counties all set records for home prices last month, ushering in the busy spring season with one of the biggest monthly price hikes in years for the nation’s hottest housing market.

King County’s median single-family home hit a new high of nearly $600,000 in March — about double the prices seen at the bottom of the housing bust five years ago, according to monthly figures released Thursday.

Prices jumped more than 7 percent from just a month before, the second-biggest increase in the last three years.

In Seattle, the median price for a house hit $700,000 for the first time. Prices in the city have also doubled in the last five years, and have climbed $60,000 in the last year.

Even the escape to Tacoma isn’t offering the same savings it used to. Pierce County, which had been slower to recover from the recession, has for the first time broken its home-price record set 10 years ago, before the housing bubble popped, according to data from the Northwest Multiple Listing Service.

With the busiest homebuying stretch of the year about to kick off and the supply of available homes at historic lows, real-estate agents say there won’t be any relief for buyers any time soon.

“We just have one of the largest pent-up demands we’ve ever had, in terms of numbers of buyers out there,” said John Deely, principal managing broker in Seattle for Coldwell Banker Bain, and the listing service’s board chairman. “The demand is so high, it’s hard to say that (prices) are going to stop going up. My thought would be they’re (eventually) going to stop going up so fast as they have been.”

Demand — propelled by rising employment numbers, growing salaries and tenants desperate to escape soaring rents — has far outstripped a supply of homes for sale that reached an all-time low in February, creating intense competition and driving up prices.

The number of homes for sale did rise from February to March, which almost always happens this time of year, but the inventory of homes on the market was still down 21 percent from a year ago. That’s because fewer people are putting their homes up for sale, but also because homes are selling so quickly.

The number of homes for sale across the Seattle metro area has plummeted 67 percent in the last five years, the second-biggest decline in the country behind the Salt Lake City region, according to Trulia.

Home inventory is dropping almost everywhere, and this winter was at its lowest level nationally since 2000. But the drop in homes for sale locally has been about twice as dramatic as the average big-city decline.

“The affordability of homes in the region continues to dampen supply, as existing homeowners will likely find it cheaper to stay put and renovate rather than trade up to another home,” said Ralph McLaughlin, chief economist at Trulia. Across Greater Seattle, “both starter and trade-up homebuyers would have to spend over a third of their income to buy a home, which is considered unaffordable by most standards.”

The Seattle region has had the fastest-rising home prices of any metro area in the country for the last five months, according to Case-Shiller.

Statewide, Washington home prices rose 11.1 percent in February, the most of any state in the country, according to CoreLogic.

Both locally and statewide, home prices are rising about twice as fast as the national average.

While residents in King and Snohomish counties are used to seeing home prices reachrecord heights, Thursday’s data showed that Pierce County is booming, as well.

While housing prices rose locally over the last several years, Pierce County home costs had remained below the peak reached in summer 2007, when the median single-family house was $291,000.

That changed in March, when Pierce County’s median house price hit $295,000 after the fifth straight month of double-digit percentage growth, year over year. More people priced out of King County have been looking to move south for affordability, adding to pressures on the Tacoma-area real-estate market.

“As the first quarter ends, the South Sound market continues to bubble along,” Dick Beeson, principal managing broker at RE/MAX Professionals in Gig Harbor, said in a statement.

Beeson was among those to point out how this winter’s miserable weather — with record rainfall and colder-than-normal days in recent months — might have been a deterrent to home shopping.

Meanwhile, Snohomish County set a new price record for the second straight month, with a median of $425,000, up 10.4 percent from the previous year.

Joining the record-breaking club was the Eastside, which posted a median price of $870,000, or $38,000 more than last month’s record-breaking figure. Eastside prices were up 17.7 percent from a year ago.

Condo prices continue to accelerate the fastest, driven by demand for cheaper options. Seattle condos cost a median of $434,000 in March, up 14.2 percent from the previous year, although down a bit from a month prior.

Neighborhoods and towns seeing the biggest price jumps continue to generally be outlying areas that are heating up as more people get priced out of Seattle.

Downtown Seattle and the Renton-Highlands/Kennydale area were the only places where prices decreased, while home costs in North Seattle and Burien increased only slightly.

J. Lennox Scott, chairman and CEO of John L. Scott, summed up the market by calling it “straight-up crazy.”

On the other hand, Kitsap County still lags its pre-recession high. Prices there were up just 3.1 percent in the last year — the smallest increase in more than two years — to a new median of $288,000.