Buying a home in Seattle these days is no easy task, thanks to low inventory and competition among the many thousands of people moving to the region. But it’s been well documented that selling one is a lot more satisfying, and a new analysis from Zillow shows just how financially true that is.

The Seattle-based real estate media company reports this week that West Coast home sellers saw the greatest profits from sales made in 2017. Seattle trails only the Bay Area cities of San Francisco and San Jose, Calif., in percentage of profit gained between original purchase price and 2017 sale price.

In the Seattle metro area, homes sold for a median of $123,000 more than the original purchase price — a gain of 44.7 percent, according to Zillow. The typical seller owned a home for 9.9 years before selling it in 2017.

Nationally, the profit figure is about 21 percent, with home sellers in 2017 making about $39,000 after owning their homes for eight and a half years. In San Jose led the nation, with sellers typically making 54 percent more than they originally paid for a home nine years earlier. In that city and nearby San Francisco, sellers made more than the median value of a typical U.S. home.

In the Seattle region, sellers earned the most in Mercer Island, Wash., selling for a median of $470,00 more than they paid for the home. At the percent gain level (instead of the dollar gain level), Zillow found sellers in Bellevue, Wash., gained the most, at a 73 percent gain.

The Laurelhurst neighborhood of Seattle is super hot, and earned sellers $586,000 more than they paid for the home. At the percent gain level, sellers in the North Beach neighborhood gained the most, at a 112.4 percent gain on the sale of their home.

“In a housing market that’s been plagued by low inventory and increasing demand, homeowners in the nation’s hottest markets have been able to cash in when they sell their homes,” Zillow senior economist Aaron Terrazas said in a news release. “A home is typically the biggest investment someone makes, and it’s paid off for longtime owners in many markets across the country. Today’s typical seller bought in 2010 — just before the national housing market bottomed out in 2012. Of course, these sellers typically are buyers as well, but the profits from the sale of their former home give them an advantage over first-time buyers who may be coming in with smaller down payments.” 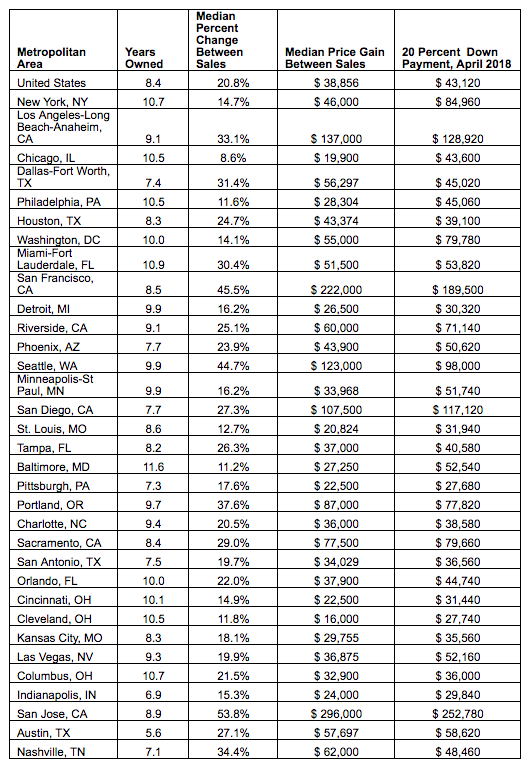